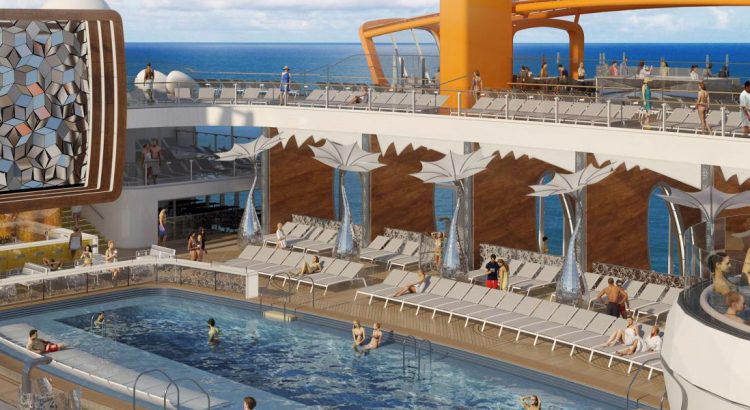 The new flagship of Celebrity Cruises, Celebrity Edge, arrived in Civitavecchia for the first time in Italy on Saturday, May 25th. There will be two embarkation ports in Italy and Barcelona for the revolutionary and ultramodern ship for its trip in the Mediterranean throughout the summer.

Celebrity Edge is the first and so far the only ship created entirely in 3D. The world-famous architects and designers, such as Tom Wright, Jouin Manku and Patricia Urquiola signed their names at the first post on the ship.

The Features of Celebrity Edge

The ship presents innovations in the cruise industry never before seen at sea: Magic Carpet, the mobile platform that constitutes a “cantilever” extension on the side of the ship, which can position itself on four different decks and transform itself according to the restaurant environments with a view of the sea into a relaxation or embarkation area for shore excursions.; Eden, a large space on several floors that changes color and setting as the day goes by and houses a restaurant and a cocktail bar; Rooftop Garden, a terrace at the top of the ship with plants, trees and designer sculptures and a unique view.

Celebrity Edge offers high-level gastronomy. There are four main restaurants (inspired by Italian, French, Cypriot and American cuisine), seven specialties (among which Fine Cut Steakhouse with first choice meat; Le Grand Bistrot with high level French cuisine and Raw on 5 where you can taste oysters, caviar and seafood) and exclusive choices for those staying in suites and 11 bars. In addition, the recipes in all the restaurants are created by Michelin-starred chef Cornelius Gallagher.

To have more connections with the outside world, Celebrity Edge designed the cabins with Infinite Veranda concept: large windows can be transformed the rooms into an open-air terrace by a simple click to overlook the sea.

Passengers in suites will have an exclusive space, The Retreat. There is a private pool, terrace, bar and butler service at all hours of the day.

The Itineraries of Celebrity Edge

The Celebrity Edge summer cruises departing from Italy will sail from Rome-Civitavecchia and offer two itineraries: one seven-night trip to discover the best of the Western Mediterranean, with the stops in Capri, Pisa, Montecarlo, Cannes, Palma de Mallorca or Barcelona and one 10-day trip to the most beautiful and iconic locations in southern Italy and the Greek islands. The itinerary departing from Barcelona will be for a week and include the stopovers in Valencia, Ibiza, Provence, Nice, Florence and Rome-Civitavecchia.